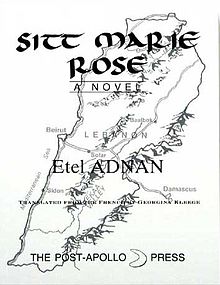 For this, I read PART II of James L. Gelvin’s The Modern Middle East: A History, Fourth Ed. from Oxford University Press as historical background and the first sixty pages of Sitt Marie-Rose by Etel Adnan, translated by Georgina Kleege from The Post-Apollo Press.

“There’s no noise in this world. That’s why the war doesn’t stop. Nobody wants to stop it.”

The first thing that strikes me about these three lines is the deixis in the second sentence. The deictic “that’s” seems to refer back to the previous sentence, qualifying the phrase “why the war doesn’t stop” with “there’s no noise in this world;” however, the third sentence complicates this by seeming to be a different qualifier of “why the world doesn’t stop: “nobody wants to stop it.” In other words, the deixis in the second sentence functions for both the first and third sentences and I want to explore how each case is different from the other.

Case 2: reason why the war doesn’t stop is because nobody wants to stop it OR (as conditional) If somebody wanted to stop the war, the war would stop.

Case 2 seems to be the more direct and yet it becomes the second case, as it chronologically comes last in the phrase. By ‘more direct,’ I mean the claim that nobody wants to stop the war and that’s why it continues is a much more useful, used, understandable, and straight-forward claim than Case 1. It is logical to say nobody wants to stop the war; therefore, the war doesn’t stop. Case 1’s two clauses seem to be unrelated: there is no noise in this world and therefore that means the war does not stop. What does noise have to do with continual war? Why would having noise make war stop?

Case 1 leads us to a subplot functioning in Sitt Marie-Rose: the deaf-mute students at the school where Marie-Rose teaches. We get to see, with the shifting points of view, what may be several or at least one student of hers. It is one of these students that says our chosen quote. So, again I ask: What does noise have to do with continual war? Why would having noise make war stop?

I think in many ways, these children understand the world to be noiseless and one of them comments on their ability to dance by feeling the beat rather than hearing it. In the same way, they can feel the drumming of the bombs. They are ostracized by their communities and families, beaten by their parents, and loved only by Marie-Rose. But this still doesn’t qualify that a silent world means the war doesn’t stop.

The figurative function of hearing in the text is thus: Marie-Rose seems to be claiming, in so many words, during her fight with Mounir that he (and the militia) are not hearing her argument or the argument of the Palestinians. She says

“our survival depends on theirs…The Arab world is infinitely large in terms of space and infinitely small in its vision.”

Here, Marie-Rose invokes a different sense: sight. Literally speaking, she’s saying that of all the geography the Arab world takes up, there doesn’t seem to be much sight. Figuratively, though, she’s talking about vision: a perfect word the translator chose here. It comes with a connotation of the supernatural or of an optimistic future: as in “visionary.”

So, as clichéd kumbaya as this might sound, what Marie-Rose and Case 1 are alluding to is this notion that until we all listen to one another, until we see each other as people instead of as “sects and sub-sects, ghettos, communities, worked by envy, rotten, closed back on themselves like worms” – as enemies – then the war will not end.

For this reading (in my Literature of the Middle East and North Africa course), we read Ghassan Kanafani’s Men in the Sun and Other Palestinian Stories. Men in the Sun, his novella in this collection is not addressed here.

The group of stories we had to read this weekend was all concerned with storytelling itself. One of the things I find interesting is narratology—it’s just something I really enjoy. One of the things that kept striking me in each of these stories was the focus on the way information gets told to us. Kanafani’s stories avoid direct narration in favor of round-about ways to tell us information.

In “The Falcon,” a lot of the information told to us by Jadaan (particularly at the end) is recognized as “weak and scarcely audible” (107). In the excerpt from Umm Saad, the information on young Saad is all given to us via his mother – and in turn, her advice to the narrator is for him to go and tell the general, not her. “A Hand in the Grave” has characters who are all concerned with the potentiality of the story – Nabil is concerned with being a part of the “in-crowd” if he has a skeleton to bring and Suhail wants the opportunity (and then cashes in on this opportunity) to talk about the experience of digging up a skeleton. Even in the peripheral storylines of “A Hand in the Grave,” the father is concerned with what is not being told to him (whether Nabil got enough rest). Finally, in “Letter from Gaza,” the story is epistolary and we are told that Nadia had previously also written letters to her uncle about what she wanted.

What does this all mean? I’m not exactly sure. What I’m curious to discuss in class is how information gets told to us and what relevance that holds. I gather that Jadaan’s voice is particularly distorted in “The Falcon,” but I’m left wondering why Kanifani mentions this if he goes on to tell us what Jadaan says anyway. Are we to question whether our narrator heard Jadaan’s advice? Are we to question whether to trust the advice if it sounds like it’s coming through a tunnel? When Mubarak is whispering to the narrator, are we to understand this as intimacy or distrust it because he’s seemingly tattling on Jadaan. I know these are a lot of questions without seemingly any sort of thesis to answer them, but I’m just curious with why the way information is told to us is relevant – what are we to think of the information itself if the presentation is altered? That’s my concern.

To zoom out, it makes me think about the media focus that Zionist western sources have taken – on Israel. And even when Palestinian stories are told or used, it seems hopeless – like there is no helping a people who are so hurt and dow

n that they have no sense to lead (when that is in fact not true – there is leadership in the Palestinian fight for independence). But to me, as I was looking through Jadaliyya, I came across a photo set called “Gaza in the dark” from Aljazeera (http://www.aljazeera.com/indepth/inpictures/2016/08/gaza-dark-160801143748969.html (Links to an external site.)).

Depicted in the photos is the life of many Palestinians living their lives mostly in the dark, as the Egyptian-Israeli blockade renders electricity rationed. How does this relate? Well, the basis of the series is to illustrate how life looks quote-unquote ‘in the dark.’ This concerns the distortions of imagery and storytelling visually whereas “The Falcon” focuses on the auditory distortions of information delivery and “Letter from Gaza” focuses on the formal procedures of epistolary and “A Hand in the Grave” focuses on the ramifications of telling a ‘good’ story or a ‘bad’ story.